I started cooking at a very young age. My mom had us helping plan the weekly menu and helping with dinner from when we were pretty young. Oh and just in case you were wondering, whenever I was asked for my input for the menu my top choice was bean burritos. Just refried beans and cheese in a tortilla. It was my fave and yes I still love that simple food item today.

But back to me cooking. When I was 10 years old and my sisters were 8 and 3, my mom was put on bed rest for many many months while she was pregnant with my youngest sister. I don’t remember if I cooked meals completely on my own or exactly what the circumstances were but I remember I had a big part in getting dinner ready.

My specialty for many many many years that I would make on Friday nights while babysitting while my parents went out was chicken nuggets and french fries. I don’t know how we didn’t get sick of them and we all still love them. Chicken nuggets and french fries and we would eat on a blanket in the backroom and watch TGIF on TV. Full House, Family Matters, Step by Step, all those good shows. So my cooking was simple but I was doing it from a young age.

When I was up at Ricks and was trying to figure out what I was going to do after that I decided well I like to cook so why not do culinary arts school? Boise State had a program and that was only 30 minutes from home so I could save some money by moving back home. It is (was, apparently they don’t offer the program anymore) a small program and they only accepted 20 applicants. I applied and crossed my fingers and was excited when I got accepted!

That first day was a little overwhelming just with the lists of clothing and tools we would need. I had to buy knives and garnishing kits and the whole chefs uniform and aprons and neck handkerchiefs and bakers hat and thermometers and notebooks and huge texts books…culinary school isn’t cheap! I don’t think a single picture was ever taken of me in my uniform. It’s sad that I can’t show you how amazing I looked in my white chefs coat, black and white hounds tooth pants, hard black shoes, white apron, handkerchief around my neck and a tall chefs hat. I felt like a pirate chef…not sure why, I think it was the shoes, but I always felt part pirate. Just needed an eye patch. But let’s be honest, I was unhappy with my size and the way I looked. I didn’t like seeing myself in pictures so I probably never allowed a picture to be taken.

Culinary school was like heaven for me. Well the eating food part was heaven, the rest was a lot of really hard work. We started at 7:30 in the morning and had class and then were on our feet for hours getting food ready. During the semester we rotated through positions. You were either in the kitchen being a line cook, running the cafe, a waitress in the restaurant or in the bakery. We had one week of class before they just threw us in making food for people. I had always thought it would be fun to be a chef and have my own restaurant but this cured me of that! I was immediately put in the kitchen as a line cook. Usually you didn’t do that until second semester but there weren’t enough people in that group and apparently I had impressed someone with my mad knife skills or something, even though I was the first casualty while doing a tourne on a potato. I wasn’t used to such super sharp good knives! But they aren’t lying when they say sharp knives don’t hurt when they cut you! But it was stressful, I was brand new and had to time things perfectly and maneuver around all the other line cooks and it was just stressful. 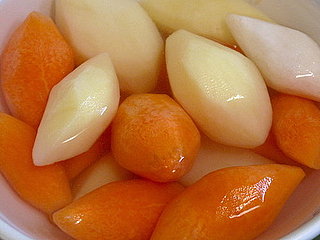 Just in case you are wondering, this is a tourne cut. It’s a seven sided football shape. It’s really tricky to do, you have to cut towards yourself. But apparently it is super fancy and looks nice when a dish is plated. So there you go…back to my story…

Back to the being in heaven part. We were required to make food all day long, till 4:30 or later every day. We had to taste all of the food we made, obviously, but we also had to taste everyone else’s food. So we were eating all day long. When you were the Garde Manger you were safe because you were making all the salads. But when you were the Boulanger or in the bakery you were in trouble because you were making bread and desserts all day every day for 4 weeks straight and had to tasted everything that was being made. The tasting part was fun, the fact that EVERY SINGLE PERSON gained weight during that time was not so fun. So me, I was overweight before I started and just gained more and more and more.

School was hard, it was stressful, tons of hard work and hours on my feet. I was living at home, didn’t have friends, didn’t know what to do with my life, was just unhappy and school gave me the perfect venue to eat my feelings away. I was good at what I did, impressed a lot of chefs and was asked to help with a huge 12 course dinner the graduating students put on one night. But none of that fixed my unhappiness and tamed my emotional eating and I just kept gaining weight.

It took me many many years but I was finally able to take all that I had learned and put it to good use. I didn’t end up doing anything professionally with my schooling (which made it a really expensive hobby) but I learned the skills to be able to pretty much do anything when it comes to food. If it wasn’t something I actually made or learned about in school I have the knowledge to be able to figure it out pretty easily. Somewhere along the way since 2000 I realized how good good food tastes. I started figuring out ways to take the foods I love and make them a little healthier. I learned to love all sorts of vegetables that I didn’t like before. I learned that I can be happy with just a couple of bites. I learned that unhealthy foods are ok at times, just not ALL THE TIME. Culinary school initially was probably the worst thing I could have done for myself but over the years I have been able to transform it into something that has truly benefited my life, is benefiting my family and hopefully I can benefit others because of it as well.

So when you see me putting recipes up on here it’s because I know food. I have eaten SO much food. I am always baking, cooking and experimenting with food. I want to share what I know, what I have learned and show the world that you can eat what you want and still be healthy. You can learn to love vegetables. You can make dishes with nothing unhealthy in them and they will taste amazing. You can still love food and enjoy food and have the healthy life that you want. It’s possible. I am living proof. I did it the hard way for all of you and hopefully that will prevent you from having to learn it the hard way too.